The history of the International ABBA Day 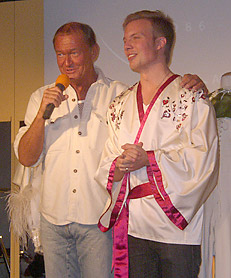 The first International ABBA Day took place on the 25th April, 1987, in Hoek van Holland and was a relatively small affair with approximately 50 to 100 people attending. The following year, the event was moved to Tilburg and held on the 9th April.

Up until 1996, our 10th anniversary, the ABBA Day was held in Schiedam – when we set up our own little museum with a few original ABBA costumes and some gold records.

From 1997 on, it was held at De Distel in Roosendaal until the place became so overcrowded that people started to dance on the tables. Since 2001, Rottier has been our home and about 600 people attended when we celebrated our 20th and our 25th anniversary.

Over the years, we have had a number of artists who came to perform at the ABBA Day, among them the Norwegian ESC contestant Finn Kalvik (who also used to work with ABBA) and Nanne and Maria from One More Time (the band of Peter Grönvall, Benny's son).

Our 20th anniversary bash in 2006 was visited by guest performers Swede Dreams, Benny's son Ludwig Andersson and his band Ella Rouge as well as Camilla and Katja from Waterloo. Owe Sandström, the designer of most of ABBA's stage clothes, also visited, presenting many of the original ABBA outfits to the fans.

The 25th anniversary was a huge celebration weekend. We had a Swedish buffet dinner with loys of partying, a photo exhibition by Bubi Heileman, performances by Janne Schaffer and Ulf Andersson – and the very important guest Görel Hanser who was interviewed on stage.

Our 30th anniversary took place in Stockholm with the main ABBA Day at ABBA The Museum. Benny surprised everyone with his visit while Mia Segolsson and Görel Hanser were interviewed on stage. Benny also answered some questions from the audience and played Thank You For The Music on the piano while the fans present sang along. Other things we arranged for our members? A very popular quiz night (Friday), the disco at Solliden/Skansen that had everybody dancing till late and that got a 10/10 from our members, a boat tour and tickets for Mamma Mia! The Party.

Read about earlier International ABBA Fan Club Weekends, personal experiences written up by various participants, see pictures and more by clicking on at a particular year.

The Official International ABBA Fan Club staff would like to thank everyone who has contributed to the success of these weekends, the fans who come not in the least the many fans who make it a worthwhile experience to organize an event like this each year. We hope to see all of you, and many more, at next year's International ABBA Day.